So there has been a lot of interesting talk going on about FirstNet as it pertains to “Public Safety Grade”.
“AT&T will meet FirstNet’s requirements for its nationwide public-safety broadband network (NPSBN), but the carrier is “hesitant to say that there is complete definition set in stone” about what constitutes a public-safety-grade system, according to a statement released by AT&T on Tuesday.
“We fully recognize and acknowledge the great work public safety has done to build requirements around broadband for this community,” according to a prepared statement provided by an AT&T spokesperson to IWCE’s Urgent Communications. “It not only informed the RFP that FirstNet put forth, but it also informed the customized State Plans the states are now reviewing. So we want to be very clear here – the FirstNet network will meet the requirements set forth by FirstNet.
It’s interesting that this topic comes up now, after AT&T was awarded the contract. You would have thought the definition of “Public Safety Grade” would have been one of the main sticking points for the program. I mean, NPSTC went and published the first standards back in 2014.How is it that FirstNet can award a contract to a national carrier without getting assurance that it would actually get a network that meets the “needs” of Public Safety?

The fact is, the “Public Safety Grade” notion was studied by FirstNet, and AT&T, they chose to ignore the topic hoping that either it just went on without acknowledging the risk, or they purposefully thought that it was cheaper to get the award and fight the client on what it needs later? Sounds very familiar. This has been a tactic in the capital program space since its inception. The fact is, AT&T, or any carrier, would never sign up to the “Public Safety Grade” standards put forth by anyone, unless it came with a big paycheck to pay for it. A national carrier will never add to their overhead any standards that contradict their ability to maximize revenue – “Public Safety Grade” does exactly that. So, unless the Federal, or State taxpayers, fork up the money to build “Public Safety Grade” it won’t happen!

The only situation that can account for “Public Safety Grade” requirements, attract more customers, and meet all the requirements of the law, is the Opt-Out State using a Public Private Partnership funded by Private Equity. This is the only way to match business goals between all those involved with deploying a State’s network.

So, what happens if we don’t deploy “Public Safety Grade”? Well a good case study is Hurricane Harvey. The FCC just put out a status of communications on all the commercial cell towers in the affected areas. These cell towers are the exact same cell towers that AT&T is offering up to Opt-In States. In short, as of the 26th of August, which this chart from the FCC addresses, does not include the days past the 26th. Below is a map of the affected areas and the rainfall totals. 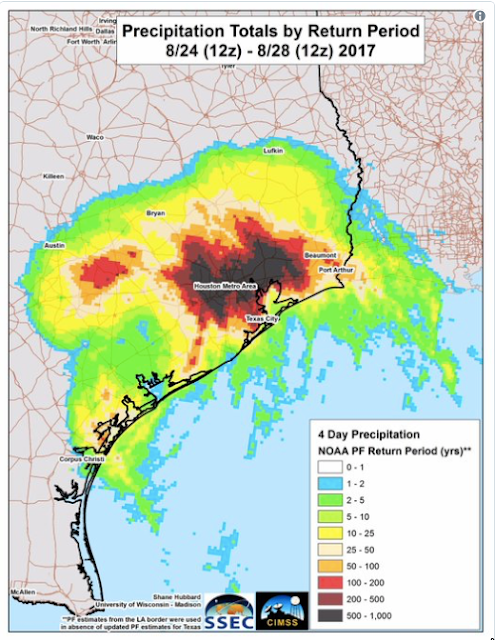 “Commercial Grade” or “Carrier Grade” cell tower designs are set to a standard of 8-hour backup generation on site. Typically, they will have power provided by the local Utility, but those Sub-Stations are also out of service, so that means the site has to rely upon its own battery or fuel storage to maintain its network….and that’s if the tower is even still standing, or still in one piece due to storm damage. Given that the Utility company typically takes two weeks to get its distribution grid back up, then you add the disaster scopes, you can figure that all the cell sites will take at least a month to get back online – and that’s if they have access to the towers themselves, materials, people and contractors.

Note: Recent Article on the topic of network coverage in the disaster area.

So how would “Public Safety Grade” be any different? Well, PSG (Public Safety Grade) is designed to withstand more stresses on the towers, the equipment and the power backup solutions. There will always be a disaster that takes down even the most hardened site, but, in this case, we are talking about heuristics of historical ups and downs of the network.  In short, what standard can withstand the most. The commercial grade solution is designed to maximize revenue by cutting overhead or limiting its approach upon the return on investment. The “Public Safety Grade” standard is designed to meet Public Safety needs…not revenue. As an example, I submit the following. In short, the affected areas cover 36 Counties. These do not include the sites out in Louisiana, or any Counties to the disaster declaration added after the FCC report.

Updated listing from the FCC just came out and the amount of towers that are down have increased to 365 -- up from 320 earlier today. The reason being is that those backup generators are running out of fuel or are saturated with water.

As you can see above, the affected sites total 6218 and as of the 26th, they were showing 314 down. Does this include sites that are partially up? To a carrier, if a sector is up and running, then the site is up. Merge that with the population coverage of those areas we get an idea of how many people have been affected with downed cell service – more than 462,661 Americans within the footprint. How many of those Americans were in life and death situations? Is 5% of the population an adequate figure to sacrifice for the greater good? Is that an acceptable figure for the Public Safety or First Responder community? Remember, this data was prior to the 26th, I can guarantee you that more people have been affected that what is presented. We don’t count visitors, vacationers, relatives or people outside of the population study. You have to also remember, AT&T, and its existing network, do not cover the rural areas, so there is a whole lot of people that aren’t even noted in this example because they didn’t fall within the metro, or extended suburbs, coverage areas that AT&T currently services for its revenue.

Here is the entire table of Counties and affected populations. 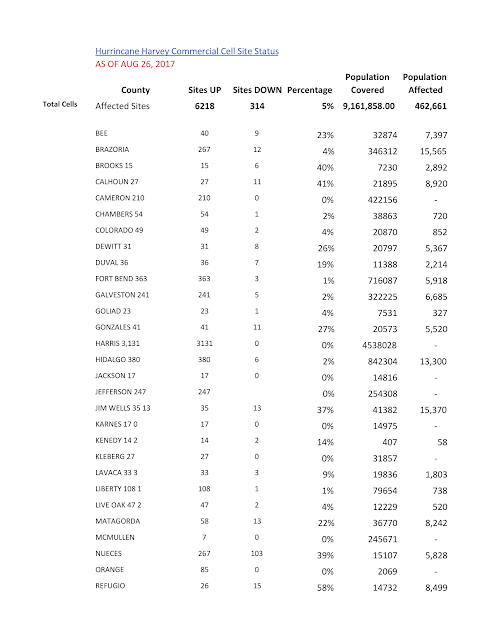 But whom am I other than….

Just some guy and a blog…..