FirstNet and AT&T Opt-In and Opt-Out States -- Make sure you know your facts before making judgment. AT&T pays millions on the press.

There is a lot to be said with one statement:

“AT&T will deploy infrastructure on the 20 MHz of 700 MHz Band 14 spectrum that is licensed to FirstNet only in geographic locations where the carrier giant determines it needs additional bandwidth capacity, an AT&T executive said during a Senate subcommittee hearing yesterday.

AT&T’s contract with FirstNet requires the carrier to deploy a percentage of the public-safety network that operates on Band 14—or Band Class 14—spectrum while meeting annual benchmarks for coverage, according to Chris Sambar, senior vice president for AT&T-FirstNet.”

So here we have it, can I say I told you so!

AT&T is not going to deploy to the rural areas and will never construct a truly “Public Safety Grade” network.

So the score so far, is 16 States considering Opt-Out (21 more to go by my account) and 7 States going Opt-in. You may note that all the States that have opted-in are struggling with their finances and have low self-esteem as to their ability to succeed, plus they also happen to be AT&T dominant States, of which all of their current Public Safety contracts are currently with AT&T. You will also note that none of the Opt-In States issued an RFP to explore the Opt-out alternative, which leads me to believe that they never intended to even consider their options, or the Governor was given misleading information. What a waste? 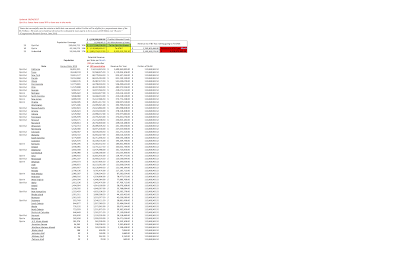 What if, a State Opts-Out and then creates its own Public Private Partnership with its own dominant carrier? That sounds like a good idea as well. Imagine if the Opt-Out State gets its portion of the $6.5 Billion, then combines its Connect America money with its Universal Service Funds, plus its BTOP grants, then commissions its own broadband solution for the State? We are talking enough incentive for the partnership with its own carrier partner to be successful. All that pooled money would make for a great looking availability payment to the States partner, plus all those fixed customers, I mean it would be a broadband network from heaven. Can you imagine not having to pay for the spectrum, getting a fixed annual payment from the State, having full access to a fixed base of users, and given access to all the ROW and land of the State, plus all its fiber assets?

In the end its always about the money and such an approach would enable a State to attract some good offerings to its bid. Or it could just commission a P3 that will create such a partnership entity to build, own and operate solution. All of these types of solutions are better than what AT&T and FirstNet are offering, then again AT&T would do better if it pursued the State Opt-Out as well, but it seems that the leadership has its mind made up on their approach. Too bad, they could have gotten a statewide, hardened, infrastructure of towers and fiber without having to spend a dime on capex. You can lead a horse to water, but you can’t make them drink.

But what do I know….