FirstNet -- AT&Ts plan for the next couple of years? Public Safety is going to be sold the same thing they already own?

The following was provided to me by a reliable source. After all the hoopla has subsided and all the money has been spent touting the FirstNet and AT&T partnership here is what is at the core of AT&Ts desires for FirstNet.

AT&T plans the following three items for near future: 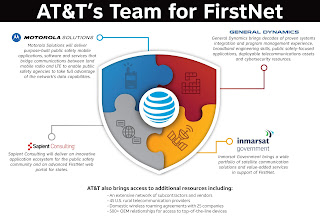 activities, if there is any construction activities. As it stands AT&T would most likely use their existing relationships with the TURF contractors to do the actual installs for the Band-14 antennas, especially being that the same contractors are going to do the AWS and 5G upgrades anyway. This would mean that GD's role would be diminished to Program or Project Management functions, if at all. AT&T has a large functioning PMO organization that has been tracking their contractors doing installs for years. Plus, I think GD was courted as part of the effort because of the long standing relationship with doing government contracting, not PMO.

Motorola is betting on the transition from LMR to LTE, which is peculiar in that they were the ones trying to convince everyone in the Public Safety community that they shouldn't touch LMR. But, things change and maybe Motorola has as well. The fact remains that the majority of the scope for the initial phases of FirstNet will be limited to installs onto existing tower sites (commercial grade -- not Public Safety grade). We shouldn't expect any mobility to be a part of the initial phases, which begs to question why is Motorola on the team other than its political pull as the leading LMR and mobility supplier of Public Safety? If LA-RICS is any indication of what their position means, then they should reassess their position instead of bleeding cash to hunt a market they aren't positioned for. But, thats just me.


InMarSat will provide the obvious rural data connections via satellite. Essentially this is the same setup for McDonalds, Wendy's, and others to gather their transactional traffic back to the billing engines of the corporate enterprise -- very low data rate stuff. It's obvious that the only reason InMarSat is in the game is to quell Public Safety's insistence on rural area coverage. But, the solution will be dead during storms, heavy foliage areas, and/or cloudy days. Plus, it will limit Public Safety to low data rate uplinks and downlinks, especially when compared to the LTE transport network and RAN architectures.

Sapient is a consulting firm and most likely hires a number of old-timers from the Public Safety space. I would see this more as a political play for lobbying the Public Safety community into accepting the AT&T and FirstNet deal, plus they want to garner the support of the 911 community.

The fact remains that the FirstNet agreement with AT&T is not going to do anything different than what is already available today, except that they get to use Band-14. If an earthquake happens in D.C., a hurricane hits New Orleans, or forest fires destroy half of California, Public Safety will still be riding the same failed commercial infrastructure. But, at least they will have priority on their own network...right? I'm sure they have a few chairs left on the deck on this sinking ship.

One more thing. I should probably write another article on this topic, but something needs to be said now. I'm reading a lot about "AT&T will spend $40 Billion to build FirstNet Network" and "the FirstNet and AT&T deal will generate 10,000 new jobs". It's rather irritating on just how obvious some of the "fake press" has been pre-generated. First, AT&T was going to spend $40 Billion for the next 10 years anyway because of upgrades and deployment of advanced RAN solutions -- even if FirstNet was there or not. Two, the 10,000 jobs are nothing to the millions of jobs that the Opt-Out States will generate. Plus, those declared 10,000 jobs will actually be inside of AT&T, not the market place.Verizon isn't hiring anyone, neither is T-Mobile or Sprint. All the are declaring is the same old process of what was going to happen anyway. AT&T goes through a cycle of upgrades and tends to hire the same contractors over and over again for their installs, they count these hires and fires in their projections this is why the TURF market stinks so much.