FirstNet: a little deception going on or is their a lack of understanding? State Opt-Outs compete with FirstNet (Opt-Ins)? 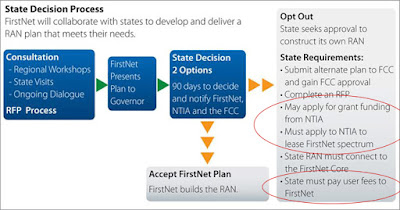 If you analyze the two red circled areas, you will see what I’m talking about.

The first area is the application for a grant from the NTIA, not FirstNet. You also have an application to lease the spectrum – “FirstNet spectrum” – from the NTIA as well. FirstNet, or the First Responder Network Authority, is not the NTIA and they don't own the spectrum. The FCC controls the spectrum and it is allocated to Public Safety. These are bogus requirements. FirstNet the organization, really has no say in what an Opt-Out State does. The only party that the Opt-Out State works with is the NTIA.

The second area is that the “State must pay user fees to FirstNet” – this also not true. If you are an “Opt-In” State, then yes you have to pay FirstNet a fee for the service they will run for you. But, if you are an Opt-Out State then all you have to do is apply for the $135 Million grant NTIA and the access to the spectrum from the FCC.

In actuality, the law is broken into sections. Sections 6204-6212 only address the creation of FirstNet; what it is authorized to do; and what it can perform in the way of creating a national solution for Public Safety Broadband. These sections do not address the States that "Opt-Out" – it only addresses the “Opt-In” States. Section 6302 is the only section that specifically addresses the State "Opt-Out" scenario and does not address FirstNet, thus creating a separation of objectives.

The diagram above tries to illustrate that a State that Opts-Out has to pay a fee to FirstNet, which is not true. Only the Opt-In States pay a fee for the FirstNet service. An Opt-Out State does not pay for service from FirstNet because it is creating its own Public Private Partnership solution that establishes it owns service. The only fee that an Opt-Out State will be faced with, note that I did not say pay for, is the connection to the FirstNet Core Network. The reason I do not state "pay for” is because the shoe will be on the other foot. The State may charge FirstNet to get access to its network that it deployed using its own funding mechanism, thus the "FirstNet fee" may be moot by the charge for FirstNet to access the State network at the local level…or at least negated.

The State that Opt-Outs is in fact creating its own Broadband entity, much like FirstNet is doing on the national level. In essence, the two are competing with each other.  A bigger threat to FirstNet will be those States that choose to work in regions with combine connectivity agreements through adjoining States, this will definitely start to take away the majority share of the network from FirstNet – and quickly – especially as it relates to operating the Cores. If this is indeed the case, then FirstNet will be just left in an oversight mode and forced to manage the standardization and interoperability process -- only.

In the end this diagram is wrong and should not be followed. The nationwide effort to build the Public Safety Broadband Network from the top-down will not work and will not meet the “self sustainment” and “self funding” goals required by the law. FirstNet needs to start working with the States to garner a stake in ownership of the State P3’s….good luck with that.

But who am I other than….