FirstNet - Could the Public Safety Broadband Network be the answer that Netflix is looking for?

The Middle Class Tax Relief and Jobs Creation Act of 2012 was signed by President Obama back in February of 2011. The Act allocates 20MHz of the D-Block spectrum to Public Safety. In short, all “Public Safety Services Organizations” will get an all-encompassing private broadband LTE network, using the exact same technology you see being deployed for AT&T, Verizon and all major carriers. That little “LTE” label on the top corner of your cell phone is the same technology Public Safety will get; but in this case their network will be private, 100% geographic coverage of the United States, plus our 6 Territories, and will be truly hardened to withstand natural disasters. Another important characteristic of this network will to classify the network traffic for pre-emptive and interruptible services during an emergency.

The network will be based on a simple solution of prioritization, where as, Priority 1 is dedicated to First Responders; Priority 2 will be dedicated to Public Safety Support Organizations, such as Utilities, Transportation, Agriculture and the likes; and finally, as depicted in the Act of 2012, the network will allow for Priority 3 services, where the underutilized, or unused, bandwidth can be allocated to commercial services, specifically in the rural areas. Why is Priority 3 Traffic a big deal? Well let me explain. 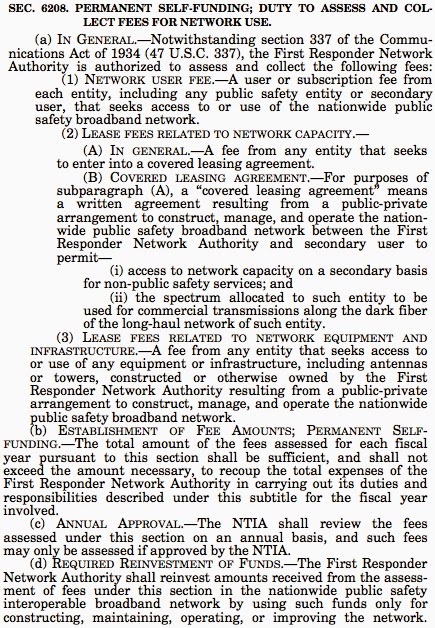 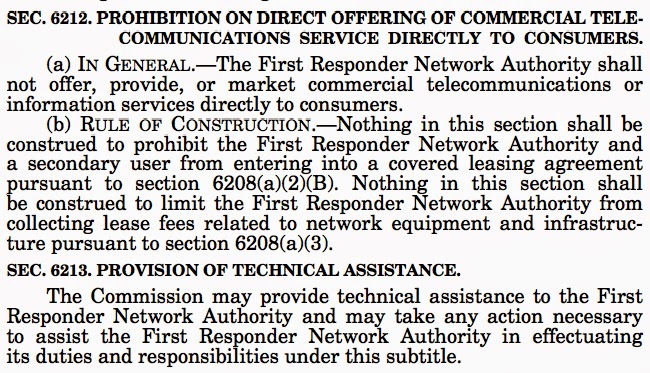 The traffic traversing the network, as Priority 3 customers, will be bandwidth fillers while there are no emergencies going on in a given geographic area, especially in the rural parts of the nation. It is believed that only the carriers will bid on the commercial access to Priority 3 users, which is not true, access to the Priority 3 traffic could actually be a really good play for NetFlix, or Google, especially if they want to avoid charges from their competition, i.e. ComCast, Time Warner, AT&T Uverse and Verizon FiOS. Essentially, no network access is free, but all-inclusive broadband coverage through the PSBN architecture would be a great revenue source to help fund “self-sustainment” for Public Safety Broadband (also in the legislation). Is this a threat to commercial carriers? Well yes and no.

Access to Americans is being fought in the halls of the Legislature when it comes to Net Neutrality and Universal Access, but those notions have changed with the new FCC Chairman. But, is that a bad thing, or just an acknowledgement that past battles on Universal Access were old school and that a new paradigm is forming? With the aggregation of the Universal Service Fund, BTOP (Broadband Technology Opportunities Program) and the FirstNet funding, we are actually experiencing a convergence of the technology as it naturally gravitates towards an all IP data centric architecture model with centralized wireline fiber optic networks, wireless broadband solutions and pervasive connections to all Americans. Essentially, FirstNet is actually solving the great divide between owners of the broadband infrastructure and the actual streaming services, such as NetFlix.

FirstNet, or the Public Safety Broadband Network, is the first network to encompass all the characteristics of broadband infrastructure implementing under the social necessity, rather than revenue producing rates per user paradigms -- essentially becoming the 5th Utility for America.

I covered this in an earlier article where I raised the idea that FirstNet would in fact do just that – create an all-encompassing wireline and wireless broadband solution -- much like we see for our water and power infrastructure in the United States. It becomes complimentary as the carriers continue their push away from owning the infrastructure and moving into content, i.e. streaming movies, music and data. Another aspect of this convergence is that the Priority 2 users are also driven towards wireless broadband with such programs as isolated, and secure, demands for transportation networks; power distribution upgrades called SMART Grid; and the coverage requirements for forest fires in the west. In short, the convergence into wireless broadband is driven by the market demands of the users, and in this case the users of the PSBN will also integrate the likes of NetFlix and Google. As we are already starting to see, the development of the Public Safety Broadband Network is actually creating the hardened infrastructure of universal access to all Americans.  I see this as a good thing. Nobody wants to own all the costly assets when it comes to commercial infrastructure, but everyone wants to gain from its inherent capabilities of perpetual broadband service.

In the end FirstNet is the seed for Universal Access where as the priorities of access are driven by need rather than revenue, essentially putting all the priority of open and preemptive access, controlled through one fixed wireline and wireless broadband solution that supports all Public Safety needs first. If a disaster happens the First Responders will have all the power to take the network over, which is not the case today. Today Public Safety would be trying to take over a commercial operation for its emergency needs impacting the commercial entities revenue source; let alone the fact that these networks are not hardened to meet Public Safety demands.

FirstNet’s network is how the infrastructure of broadband technology should be designed, where as, we focus on the social need of Public Safety, yet still remain open to commercial capitalism. If I were a carrier, I would be pushing to invest in this strategy as fast as possible. The cost of managing your own infrastructure will continue to drive against margin all while the price of services continues to fall. You can’t get any better than letting a Public Private Partnership drive your ability to access all the rural geography of the US while not constructing a single tower out of your own money. As it is today the cost of the commercial infrastructure is already starting to outpace the revenue it produces.

The Myers Model™ is the first model of Public Private Partnership that meets all the demands of the Jobs Creation Act, while at the same time balancing the needs of all involved. It’s a model that must be considered when moving forward.

Just some guy and a blog…..

So now we see another aspect of FirstNet’s flawed concept.
Recognizing that the public safety market was too small to provide a sustaining revenue stream for FirstNet, its framers expanded the marketing opportunities to include “secondary users.” This may have worked to convince Congress to move forward but it was naïve with respect to the real world in that they failed to survey the potential market as is borne out by the fact that there was and is still no pricing structure.
What they apparently also disregarded was the probable reaction of the commercial wireless carriers. These public corporations are responsible to their stockholders and employees to protect their market, increase sales, and maintain and increase revenue and profits. FirstNet’s entry into the private sector market can only diminish the commercial carriers’ opportunities and there is no reason to believe that that this will not be vigorously challenged.
So why have the commercial carriers not already reacted: strategy! There are three good reasons for the commercial carriers to bide their time. FirstNet as it is currently evolving is years away from operation. Why should the carriers wage a protracted battle when they can wait until FirstNet actually tries to sell to the private sector and then sweep in and intervene?
It is also in the carriers’ interest to wait and continue their dialog with FirstNet. What could be better than sitting in apparent harmony at the table of a future competitor? Why jeopardize this position?
The carriers’ are also wise to avoid a long term challenge to FirstNet lest their actions be spun to be anti-public safety / anti-first responder. This is certainly not how they want to be portrayed.
FirstNet also faces a market challenge the framers could not have foreseen. FirstNet will be brought to market by the same government that brings you the NSA. This may not be a problem for public safety but for the private sector this is likely to be a big issue. Businesses are now spending billions of dollars to undo the alleged harm and protect from future intrusions by the NSA. This is not a market friendly situation.
The FirstNet objective is critical and long overdue. Congress needs to reevaluate how public safety achieves the interoperability goal and modify its approach as soon as possible.