FirstNet -- How many towers and what will it cost?

Here is an interesting fact: if you take the square footage of the United States, from the US Geological website, it breaks down how many square feet we have in our Metro versus Rural environments. By using those figures, and mathematically accounting for your fixed tower coverage at 100% with LTE (Long term Evolution), then multiplying it by an average of $250K per site, you can figure out just how much it will cost (roughly) to build just the radio access (RAN) portion of FirstNet. I have listed that calculation broken down to the State level. This gives you an idea of what it will cost and how many towers will be needed per each State (no territories at this time). The RAN is just the tower portion, and does not include fiber access, microwave (although it could on this piece),Data Centers, Control Centers, mobility or handsets....not even long-term maintenance.

We need to understand that, using the LA-RICS as an example, we all believe that the use of existing towers is a must, but, you must also understand that the cost of remediation (fixup an old site) may cost more than just building a new one. Plus, existing sites will most likely not fit the bill for coverage requirements, or techical functionality. You should only anticipate using about 10-20% of existing towers if your lucky. The LA-RICs project has 232 sites and all are brandnew, greenfield sites on existing Police and Fire lands (to avoid leasing and zoning...to a point).

The thing that is disconcerting is the fact the Middle Class Tax Relief and Jobs Creation Act of 2012, that authorized the use of the D-Block spectrum to FirstNet, only allocates $7Billion (actually $2 Billion in grants and $5 Billion in future sales of spectrum). That’s not even half of what’s needed to construct just the RAN portion of FirstNet – what about Cyber Security, Control Centers, Data Centers or even just the management to get it built? And we haven’t even started talking about the cost to maintain the network long-term (typically 10% of the total capital cost to build it). Heck, $7 Billion won’t even cover one year’s annual budget to run the national footprint of FirstNet.

There is only one way to accommodate for this need -- a Public Private Partnership executed at the State level. We have to monetize the spectrum under the control of the State and its Public Safety needs. If you don’t, you will never have enough money to build it, or maintain it for the long-term. 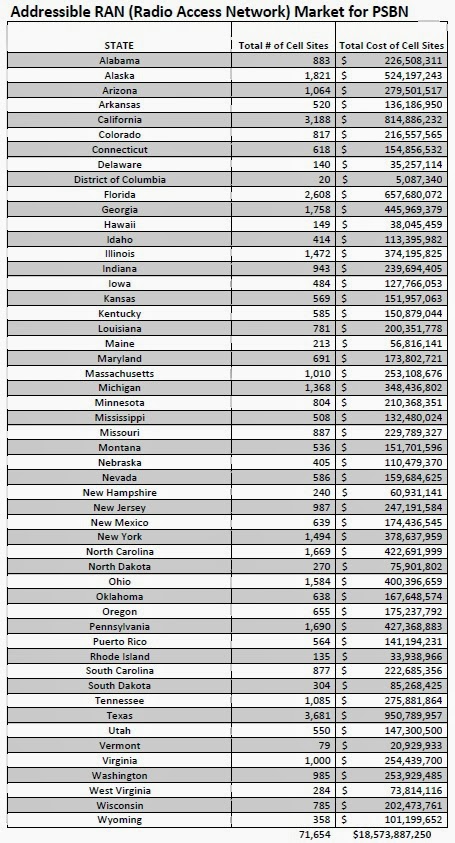