Why FirstNet and the Public Safety Broadband Needs Private Equity

One of the main questions I get when it comes to a Public Private Partnerships, and their ability to fund the Nations Public Safety Broadband Network, is the makeup of a potential Private Equity team and how it functions.

The process is quite simple: typically for large-scale telecommunication projects; a State would put together its funding sources; construct an RFP; and advertise it to the market. Then traditionally companies like Raytheon, Motorola, Alcatel, Siemens, etc… would make a responding proposal. The all-to-familiar failings of this setup is that the business aspirations of those responding vendors, as well as the markets they typically play in, don't align with the ultimate aspirations of the State's intended RFP.

For example: Motorola is a big player in Public Safety Radios (probably the biggest); Alcatel-Lucent is one of the leading OEMs for the broadband technology and Siemens is just.... well… big...they're everywhere. Whenever you have such firms respond to your needs they also respond with their overheads and their driving force of the organizations own desires -- which is typically to make money off their products.

What needs to happen is an alignment of business needs and the way to do this is by putting an intermediary into the picture…that being Private Equity.  In essence Private Equity would be the responding party to any RFP for Public Safety Broadband. All of the traditional players, such as Motorola or Alcatel-Lucent, would interface directly through a Private Equity team, established by the primary Private Equity players, rather than trying to force the State to perform anti-competitive practices in having the OEM act as the lead to deliver the solution to the State. 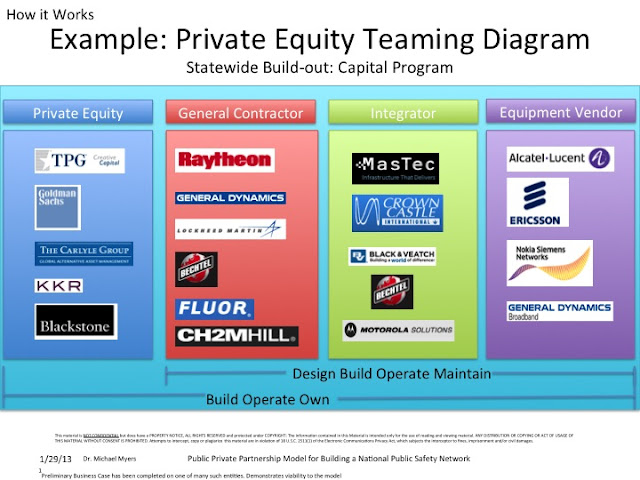 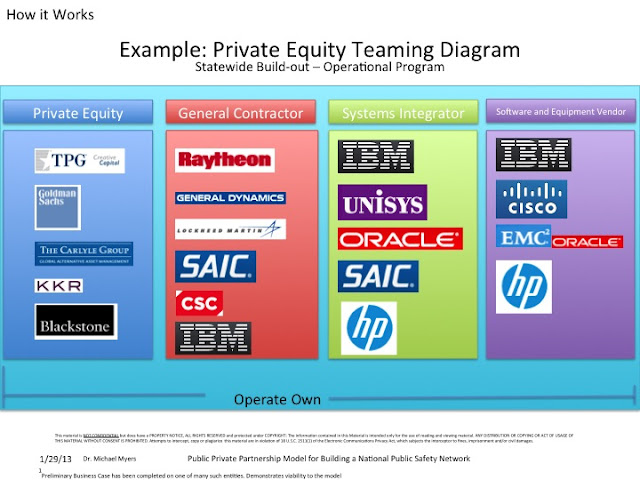 As an example: if Motorola were to be the prime to build a State’s PSBN architecture, then naturally their competition would be precluded from playing, which means the client ultimately looses out. Why drive a broadband solution based on one or two possible hardware configurations. I mean Motorola is mainly a product-producing player not a General Contractor, thus wouldn’t be the strongest player. But…. one has to ruminate that any company can be considered a prime if they manage to sell the client on the idea. One has to also remember that a product producing company is in the business of selling products and unfortunately selling an hourly wage on a cost + material job isn’t very marketable if you carry product producing overheads in those hourly rates.

One thing that always strikes me as odd is when a client, like a State, hires an OEM, like Motorola, to build their entire communications solution. To clarify, a $100 Million dollar LTE project will have more than 80% of the scope tied up in services (Project Management, Construction Management, Engineering, Controls, Governance, etc.) and less than 20% has to do with materials (gravel, concrete, steel, radios, servers, etc.) – of that 20% less than 3% is actually related to a vendor OEM solution, i.e. LTE radios (of which Motorola doesn’t produce…yet). Why would I have a company in charge of my entire project when they only bring 3% of the total cost to the project? Seems kind of asinine as well from the OEM’s perspective. Why would I take on all the risk of a $100 Million dollar project when I only have $10 Million in product placement? Why would I then try to sell an hourly rate that is twice the average market rate? Somewhere along the way I must be paying for the project rather than the project paying me.