Where will the funding come from to build the Nations Public Safety Broadband Network -- FirstNet?

Outside of the fact that the FirstNet Board is now starting to realize that a majority of their time will probably be spent in more of a political role than appointed positions to actually build an executable framework maybe they should really start to look at a business model. One of those templates for execution should be the business model that any given State can follow.... I am talking about a framework for a Public Private Partnership arrangement that the State can use to successfully build its statewide Public Safety Broadband Network. As part of that business plan there needs to be a clear and simple context of where the revenue will come from.

Having spent the better part of the last 10 years putting a Public Private Partnership model together that FirstNet and the State's can use, I decided to post some easy slides so that everyone can get an idea of where the money will come from to fund this Nationwide Public Safety Broadband Network.

These slides are quite simple to understand but contextually they mold quite well with setting a course for where the money needs to come from.

The funding sources will come from the Prioritized "Public Safety Service" responsible organizations as outlined by the legislation itself it is clear to see that the inclusion of these entities has already been written into the legislation.

Through the Middle Class Tax Relief and Job Creation Act of 2012 (Act) became Public Law 112-96, 126 Stat. 156 (2012). It states in section (27) PUBLIC SAFETY SERVICES —The term ‘‘public safety services’’— (A) has the meaning given the term in section 337(f) of the Communications Act of 1934 (47 U.S.C. 337(f)); and (B) includes services provided by emergency response providers, as that term is defined in section 2 of the Homeland Security Act of 2002 (6 U.S.C. 101).In short, section 337(f) of the Communications Act of 1934 (47 USC), it states under sub-section(f) Definitions: The term ‘‘public safety services’’ means services- (A) The sole or principal purpose of which is to protect the safety of life, health, or property;(B) That are provided- (i) by State or local government entities; or (ii) by non-governmental organizations that are authorized by a governmental entity whose primary mission is the provision  of such services; and (C) That are not made commercially available to the public by the provider 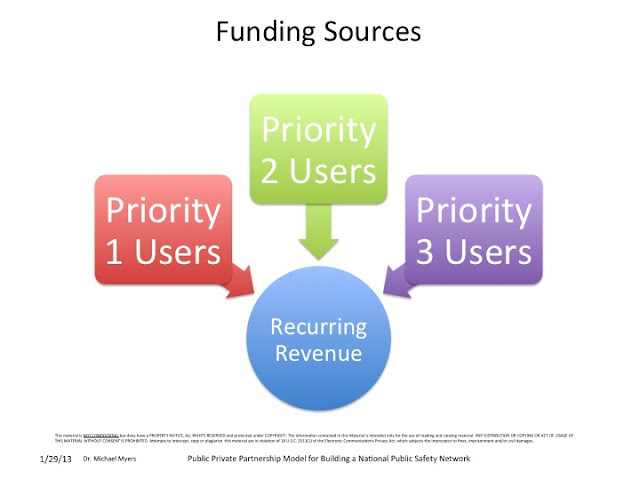 The primary element for funding the National Public Safety Broadband Network will have to come from the inclusion of Private Equity. But Private Equity needs to have a reason for coming to the table. The primary reason Private Equity would be interested is with a long-term recurring revenue stream, but they will also look for fixed string clients that are backed by the Government's financial support. 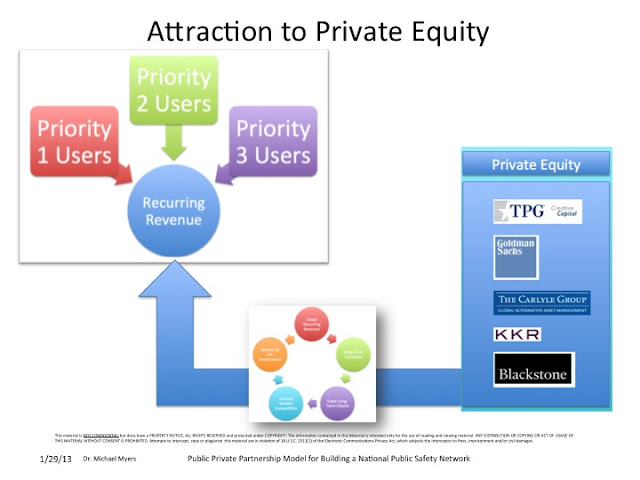 In breaking down the recurring revenue stream Private Equity will be interested in the primary sources of revenue (this is not a complete list but illustrates enough to break-even on the business model). Using the Priority scheme laid out by FirstNet in its original presentation by Craig Farrell, Priority 1 Users are made up of First Responders, i.e. Police, Fire and EMS types (short list). The primary issue with these players is their use of "subscription based" handset sales and monthly usage characteristics. This is the result of having to rely on the commercial carriers to provide them their gear. In essence they had to align with the original business model of a commercial carrier which is a "subscription model". 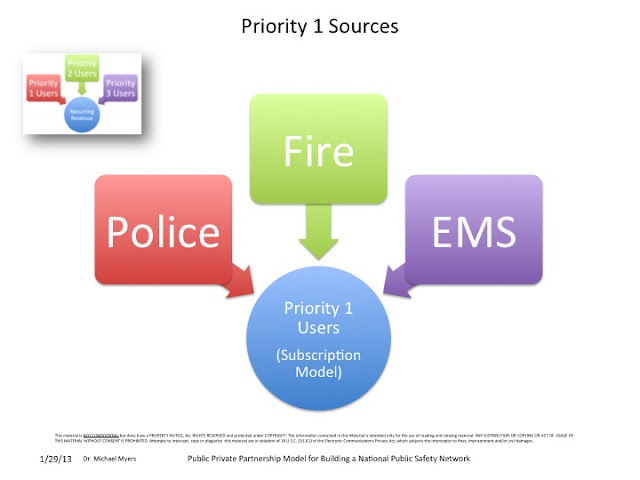 Priority 2 users are actually the new "primary source" of the funding needed to support a statewide build-out of the PSBN. In the end this is a "Private Network" no matter how we look at it, thus we are not restricted to the "subscription model" that the carriers use. What is more attractive is the standing long-term lease arrangement (20-30 years) for broadband services that eliminates the users requirement to spend capital on building their own solution and moving to a fixed operational cost model that strengthens their own internal business needs. Additionally  these Priority 2 users can off-set any existing investments for past communication infrastructure assets as available assets to the statewide PSBN plan. By moving to a fixed "OpEx" model the Priority 2 user also signs up for a fixed SLA (Service Level Agreement) with the State PSBN P3 entity that becomes the primary basis for the recurring revenue stream that attracts Private Equity. 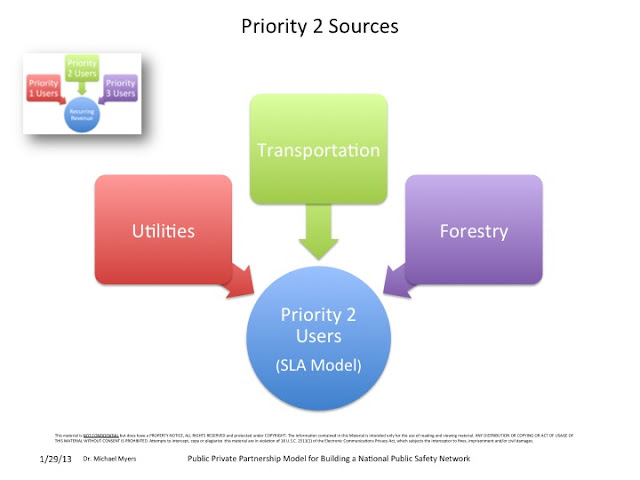 Priority 3 users are the interesting part. Through the PSBN hardened architecture and its P3 entity the commercial carriers (as well as the Utilities) can compete to access the rural broadband customers that fall within the coverage area of the PSBN network. In short, the commercial carriers would bid for the right to access these rural customers, to provide commercial broadband service, through the established architecture of the State's PSBN architecture. Ingenious! This would mean that we can solve multiple problems with our current "Connect America" plan of which also helps pay for the PSBN architecture itself. Although, this money would not be significant it will be enough to help fulfill the State's P3 entity with continued re-investment into the statewide PSBN architecture. 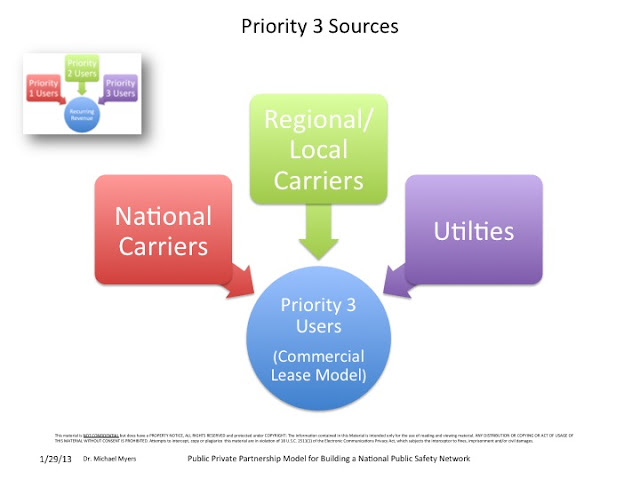 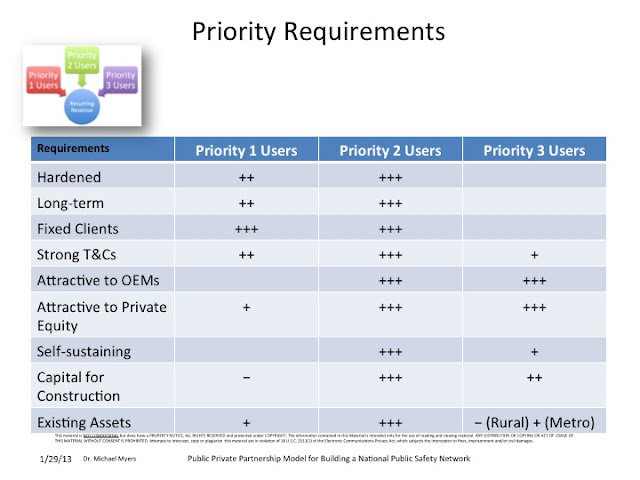 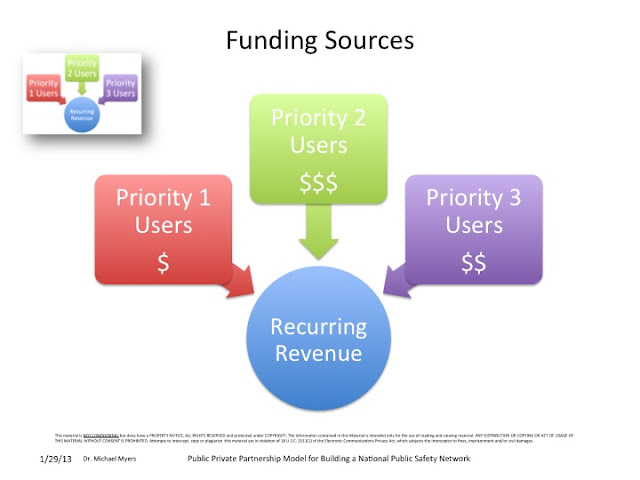