Did you realize that the California High Speed Rail program, which was just voted in by the State Constituents, is made up of 10 segments? And the last I heard…when I was deeply involved…it was running in the estimates of 90-100 Billion dollars fully completed (forecasted 2009).

Did you also realize that the GSM (Global System for Mobile Communications) standard was a basis for on-board high-speed rail communications…better known as GSM-R? The “R” stands for Rail. There is an entire multi-billion dollar industry behind just this solution. I bet you may also know that the standards body for the High Speed Rail Communications (an APTA sub-committee) is adopting an LTE-R as its standard moving forward. That means they will actually need to get access to the LTE broadband technologies. This would put them in the same boat as the Utilities, Healthcare, Agriculture and DOTs (other than rail) in requiring access to the spectrum… that means they will have to go private or commercial to get it. They could fight for the spectrum -- but that would be a long and strung out battle. Plus they would still need to convince the OEM manufacturers to produce the gear to talk on any frequencies not included in the current spectrum roadmap.

On a typical DB (design build) job for the rail industry; communications and IT solutions run at around 10-15% of the total capital budget allocated for the build. It also runs at around 10% of the CAPEX (pertaining to the communication and IT subset) that would be allocated towards operating the technical platforms on an annual basis. For the California High Speed Rail Program that would mean that (and I will use a conservative 10%) $9 Billion would be spent throughout the entire build phase with another $900 Million in annual operating costs. Someone check my math please….. I hold a PhD in Organizational Management not Math. That seems like a pretty good size market to me. The only real issue, much like other industries that are in the same size and scope, they take a long time to get moving. So don’t charge out there and try to build your business on it expecting returns within a few months…it will be awhile.

Did you also know that a typical Transit Agency (one that would operate such a rail program) typically has its own Police Force? It may be just me, but wouldn’t that constitute them as a First Responder and Public Safety Broadband player as well? Also you must realize that just in the High Speed Rail market alone, not including Heavy Rail, Mass Transit Subways and Telecommuter Rail, there are more than 53 planned routes for high speed service throughout the Untied States. 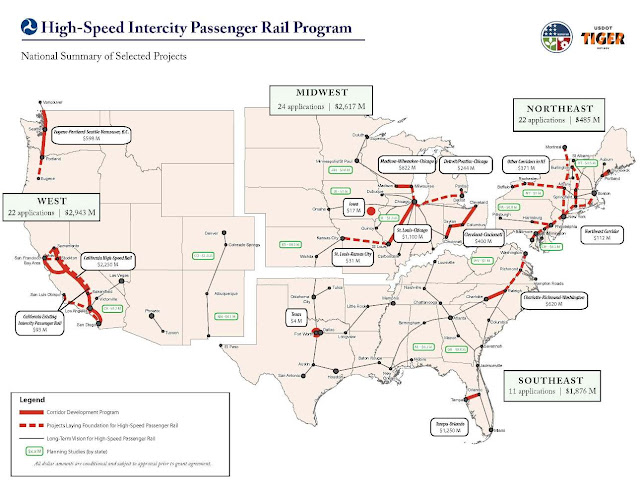